Since January 2016, the position of the top academic players MIT – Broad – Harvard and University of California has not significantly changed in the landscape of CRISPR inventions, as they have also more than doubled their patent families over the past year (corresponding to filings from mid 2014 to mid 2015). Their pioneering patent trench warfare seems further bogged down in the middle of incredibly complex and resource-consuming US patent office interference proceedings and European opposition proceedings – on January 31st, 2017, the Broad and MIT European legal counsel requested an extension of two months to finalize their answer to opposition proceedings so they have a chance to fully review more than 28000 pages of cited documents by seven different opponents, including an external expert opinion filed by CRISPR Therapeutics at the EPO to defend their case.

As the pioneering patent and license positions will not likely progress in the short term, we see relevant data for CRISPR IP positioning tactics in the remainder of the patent landscape. On the industrial side, Du Pont (SWX:DD), Sangamo (NASDAQ:SGMO), Editas (NASDAQ:EDIT), Cellectis (NASDAQ:CLLS) and Dow Chemicals (NYSE:DOW) remain the top 5 industrial applicants. Beyond them, Regeneron (NASDAQ:REGN) and Caribou Biosciences are still part of the main applicants while Sigma (NASDAQ:SIAL) and Takara (TYO:2531) are somewhat left behind the now significant portfolios of Agilent (NYSE:A), Agenovir and Synthetic Genomics. Academic players remain very present, in particular from China but also now from Japan and Korea research institutes. 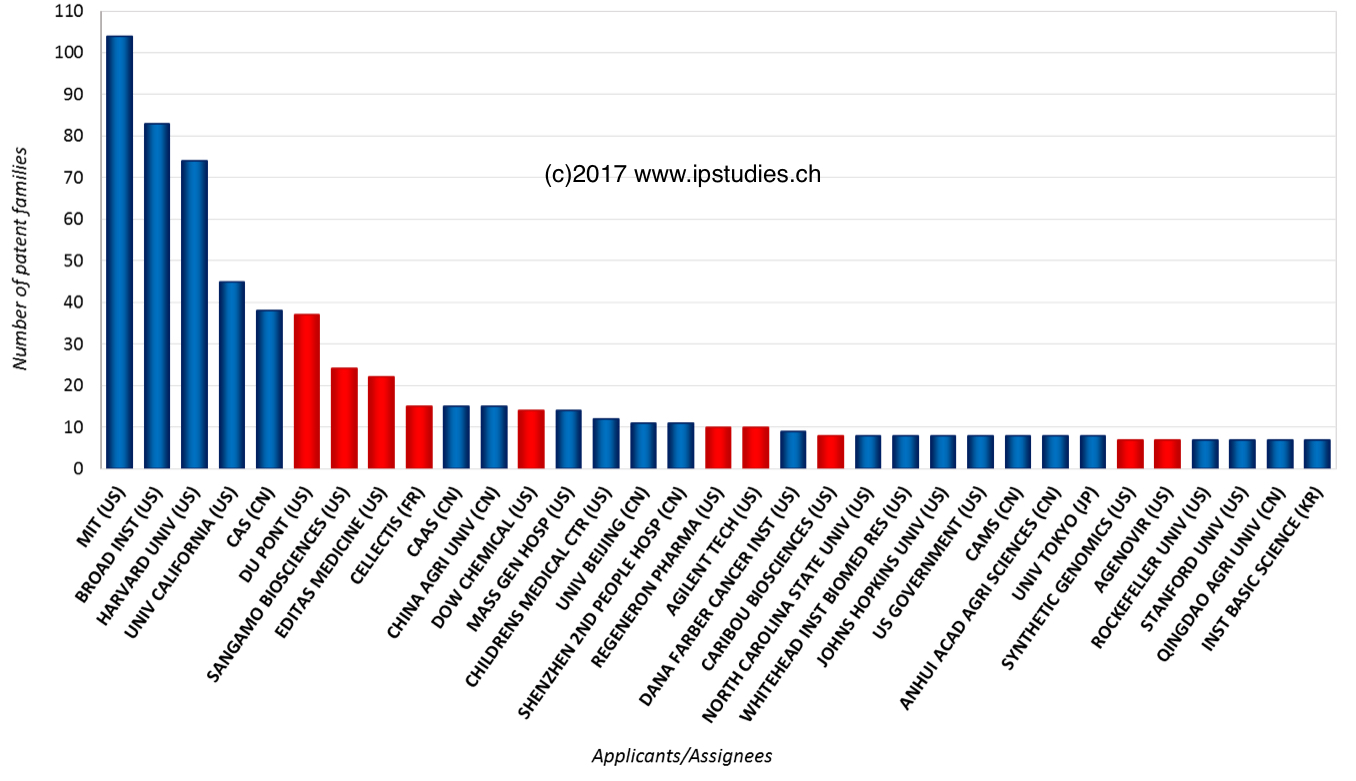 In terms of claim coverage, we notice trends in favor of modified cell applications, especially mammalian cells including human ones. The delivery and use of vectors, including viral vectors, as well as specific gRNA are also increasingly covered by patent applications. 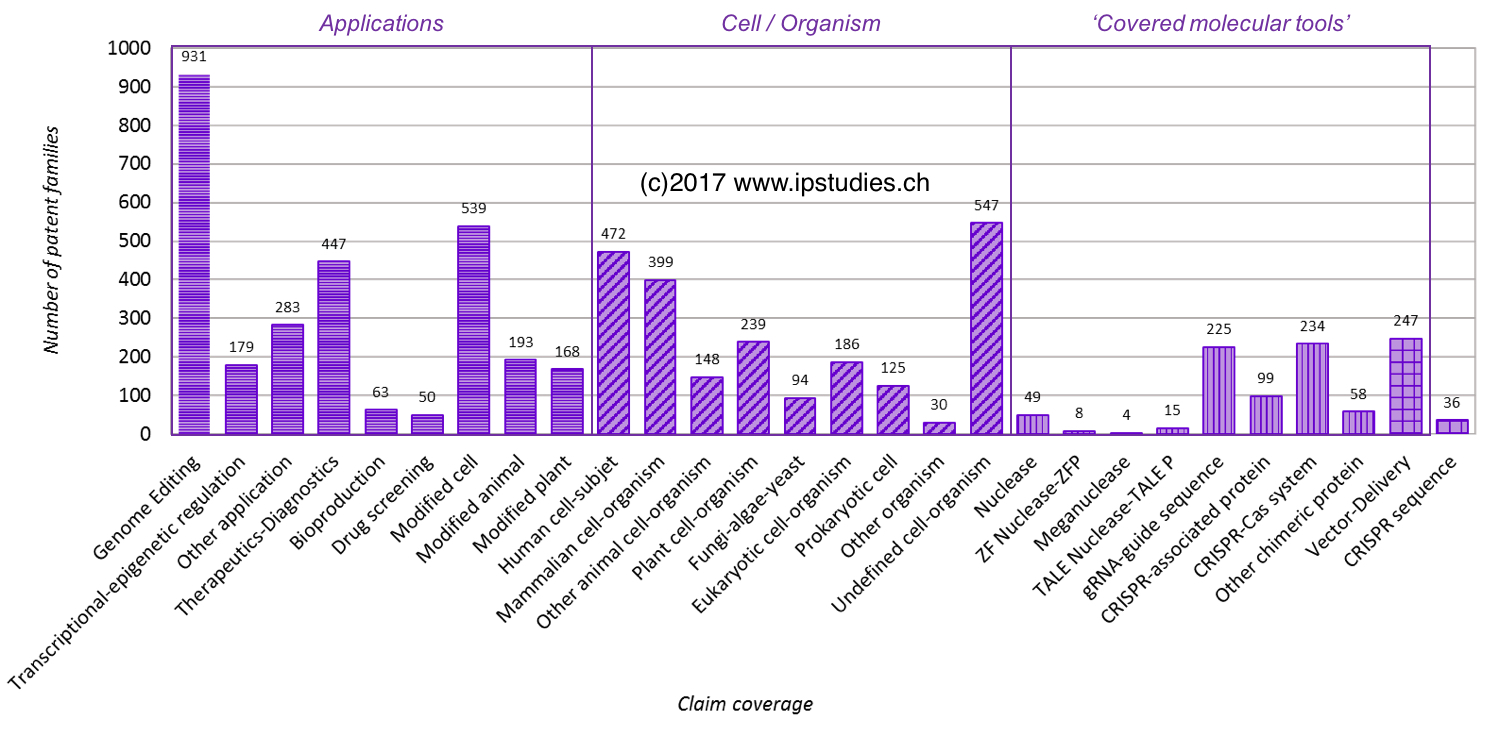 Emerging alternatives to the Cas9 component, such as Cpf1, can also be found now in the patent landscape, which may indirectly impact the on-going patent disputes and was recently reflected in licensing arrangements between the pioneering researchers in the CRISPR engineering field and certain industry players. We’ve been closely monitoring related public announcements in the past three years and have detailed more than 40 licensing deals in our 2017 patent landscape report for your convenience. 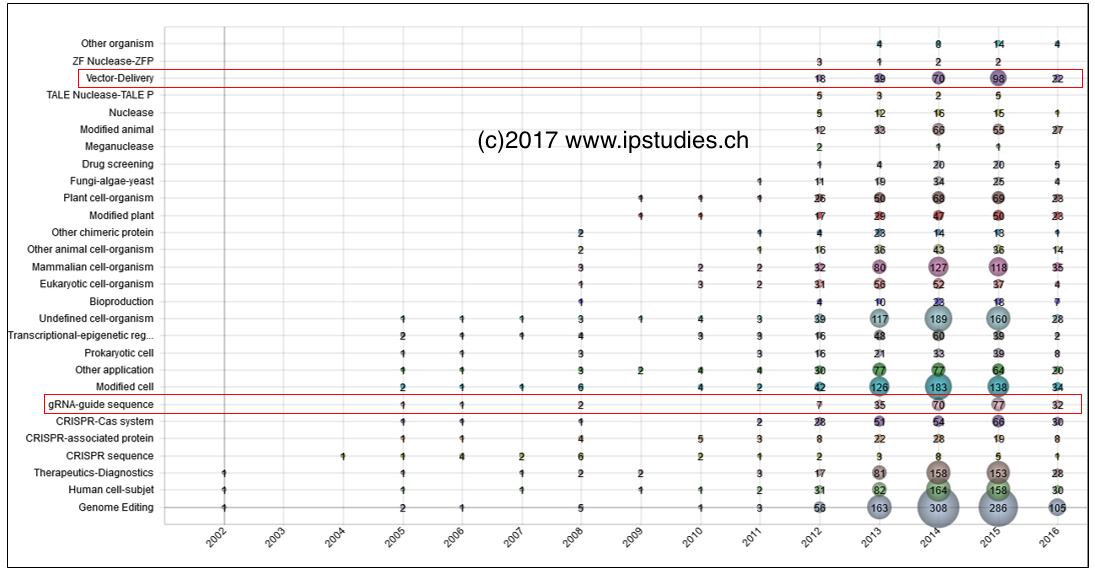